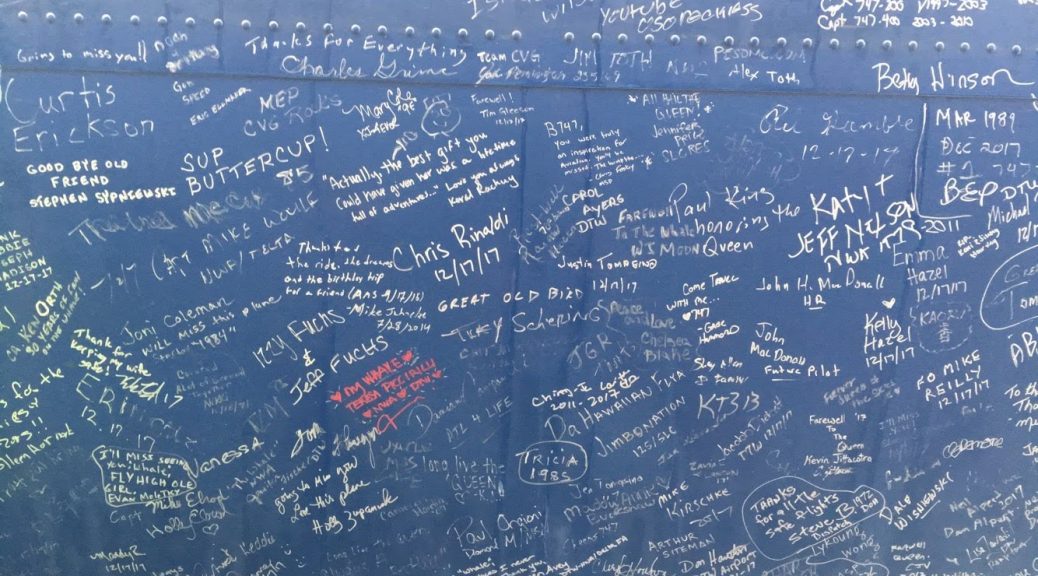 Regardless of whether or not you’re a fan of aviation, you’re familiar with the 747. The aircraft is iconic, a symbol of air travel that has spanned generations.  It was a game-changer when it entered service in 1970 as the first wide-body aircraft, a true Jumbo Jet.

I had long dreamed of flying on 747, and when I started working in the industry almost 10 years ago, that dream was closer than ever to reality. I finally was able to cross it off my bucket list in 2013, flying from Seattle to Tokyo. Since then, I’ve tried to get on every 747 that I could, and have been fortunate enough to fly the 747 18 times.

Sadly, airlines are moving more and more towards modern, fuel efficient aircraft, and the 747 is being retired at a breakneck pace. Air France retired their 747s in 2016, and both United and Delta retired theirs in 2017.

Delta did a special “All Hail the Queen” Farewell Tour, flying special, employee only charters around the US, from Detroit-Seattle (with a special stop at Paine Field and the Boeing factory), Seattle-Atlanta, and Atlanta-Minneapolis. They also held special hangar parties in each city. I was incredibly fortunate, and won an employee contest which gave me a seat on the first leg of that trip, Detroit-Seattle.

The night before the flight, I headed to one of the hangars in Detroit, where the 747 was on display. There was plenty of Farewell Tour merchandise to purchase, including posters, shirts, keychains made from the 747, and more. The aircraft was there on display and open for tours inside.

However, my favorite part of the hangar party was the ability to sign the fuselage of the aircraft. This had by far the longest line, but it was worth the wait.

The following morning, we headed to the airport and waited at our gate. There were plenty of photo opportunities, and the atmosphere was festive. To keep the experience exclusive and comfortable, no middle seats were assigned on the aircraft. Employees were given seats front to back based on seniority. In addition to the employees and retirees on board, Delta also had auctioned off seats on the flight to SkyMiles members. The winners were given Delta One seats in the nose of the aircraft, but the Upper Deck was kept open for everyone to tour throughout the flight.

Celebratory champagne was served, as well as breakfast shortly after takeoff, normal for a charter but rare for a typical domestic flight.  The seatbelt sign was turned off as quickly as possible to enable people to wander around and enjoy the 747 experience one last time. The upper deck, as you’d expect, was popular, but we also got to enjoy the galleys and crew rest areas.

There were also 747 trivia contests on board, , as well as a presentation and giveaway for the Airloom Project, Delta’s mission to preserve the first 747-400 ever built. It’s a museum exhibit at the Delta Flight Museum in Atlanta. While I signed up to donate, I sadly didn’t win the grand prize, which was a Flight Sim Experience at the Museum in Atlanta.

Shortly before landing at Paine Field, we were served lunch. I had a Caesar Chicken Wrap that was quite tasty.

Paine Field currently has no scheduled commercial airline service. That will change soon, with Alaska and United starting flights in 2018. The flight was received by dozens of amateur and professional photographers, and the media was present as well.

The flight attendants also announced that Boeing had created a special Snapchat filter for the event, which was a nice touch!

Getting the chance to deplane via air-stairs on the ramp was also special. Aircraft the size of the 747 almost always have jetbridges for boarding, so it was a nice treat.

The stop at Paine Field included a quick visit to the Museum of Flight, which was fantastic.

We then gathered to hear Delta and Boeing leaders share their stories and memories of the 747, before heading back out to the aircraft for pictures, and another opportunity to sign the plane.

Just as we were about to leave, we were held for thunderstorms in the Seattle area. The ground delay lasted for a couple hours, but eventually we took off for Seattle.

The continuing flight was also special. At 32 miles, it was one of the shortest 747 flights in history. The aircraft didn’t get above 3,000 feet and it only took 12 minutes from takeoff to touchdown, affording great views of the Seattle area.

I’ve been lucky to have some amazing aviation experiences, including flying on inaugural flights over the past few years. Being a passenger on one of the final 747 flights will be hard to beat.