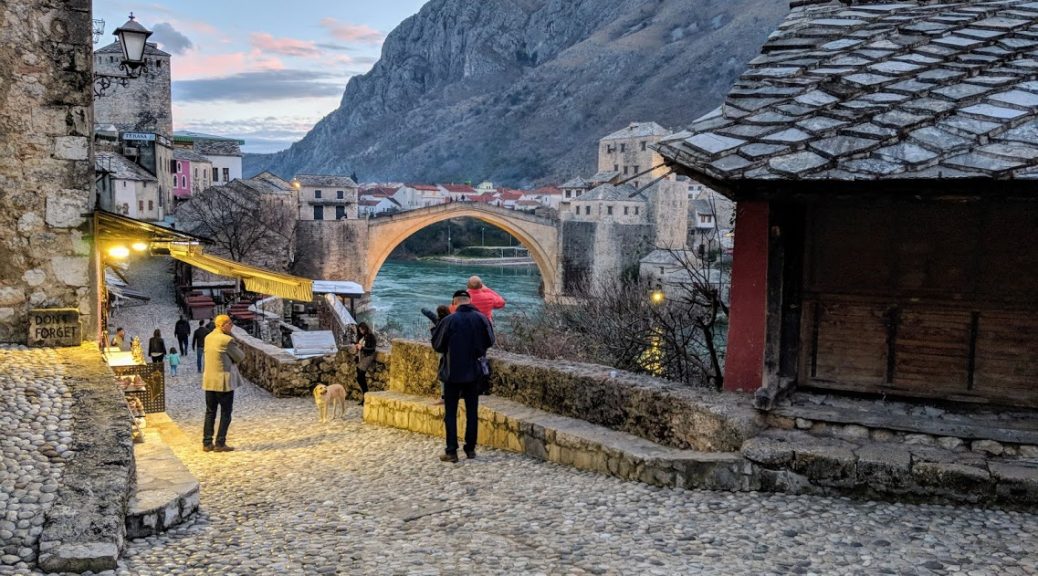 While Croatia has become an incredibly popular destination, it wasn’t the country I was most looking forward to on this trip. Neighboring Bosnia and Herzegovina has long been on my list, specifically the town of Mostar.

After checking out from the hotel, we drove down the Dalmatian coast. While you can cut inland and save some time, I’d recommend staying along the coast for the spectacular views. The roads in Croatia are well kept, though quite windy. They also hug the cliff-side for much of the drive, so it’s important to obey the speed limits.

There are many breathtaking lookouts along the way, and it’s impossible not to stop several times to take in the amazing view of the Adriatic Sea.

About two hours into our drive, we came to the border. Unlike much of Europe, Croatia, along with Bosnia and Herzegovina are not part of the Schengen area, and therefore you have to go through immigration and customs when crossing between the two countries. I hadn’t had this experience since I was a high schooler going between the US and Canada, and it was a neat blast from the past. Thankfully there wasn’t much of a wait, and we were on our way quickly.

Entering Bosnia and Herzegovina, I immediately noticed that the roads, while still okay, were in worse shape than Croatia. Bosnia and Herzegovina was ravaged during the Yugoslav Wars back in the early 1990’s. Many cities were destroyed, and thousands of land mines were planted throughout the country. There’s been a huge effort to find and disarm these mines, but heavy rains and landslides have moved many of them. It’s advised not to leave the pavement when traveling in Bosnia, as there is still a chance of live land mines. There are also many buildings that were bombed that still lay in ruins, yet to be rebuilt.

Despite all of that, the architecture is beautiful, and we stopped at a small town just over the border called Počitelj when the Citadel Tower caught our eye.

After leaving Počitelj, it was just another 30 kilometers until we reached Mostar.

The main attraction of Mostar is Stari Most (Old Bridge). It’s a UNESCO World Heritage Site and probably the most well-known landmark in the country.

The original Stari Most was built in the 1500’s but was destroyed in the Bosnian War. It was rebuilt in 2004 and closely mirrors the original.

The bridge is stunning, and affords a beautiful view of the river and the Koski Mehmed pasa Mosque. We arrived in Mostar just before sunset, and were able to hear the evening call to prayer, which is hauntingly beautiful.

The Old Town is picturesque, with cobblestone streets lined with shops and restaurants. Croatian Kuna is accepted, but I took the opportunity to take out some Bosnian Marks, as I love collecting different currencies.

After leaving Mostar, we headed south towards Dubrovnik. Our GPS took us along a different road than we entered on, and it was in significantly worse shape. The road was much narrower and poorly paved. This on its own would not have been a problem, but it was also unlit and winded through the mountains. To make matters worse, the road had no guardrail along the edge, and there were frequent large drop-offs.

I drove very slowly because of this, and it was a white-knuckle, terrifying drive that took several hours. Despite poor cell service (because why not?), we followed our GPS to the border crossing, and breathed a huge sigh of relief.

Except…our GPS took us to the Orahov Do border crossing. Unfortunately, this crossing is only in use for locals…and we were not allowed to cross. The Officer was very apologetic, but explained we would have to turn around and backtrack about 30 kilometers to the main crossing in Trebinha, adding about 45 minutes to our white knuckle drive.

Reentry into Croatia was quick and easy, and we were finally able to relax a bit, as the road conditions immediately improved. The remainder of the drive was easy, and we arrived at our hotel, the Sheraton Dubrovnik.

This brand new hotel is situated outside of the city, but has the advantage of having to deal with navigating the narrow and confusing Dubrovnik streets.

We enjoyed a room service dinner and rested up for the next day, where we’d drive south and cross off another country, Montenegro.