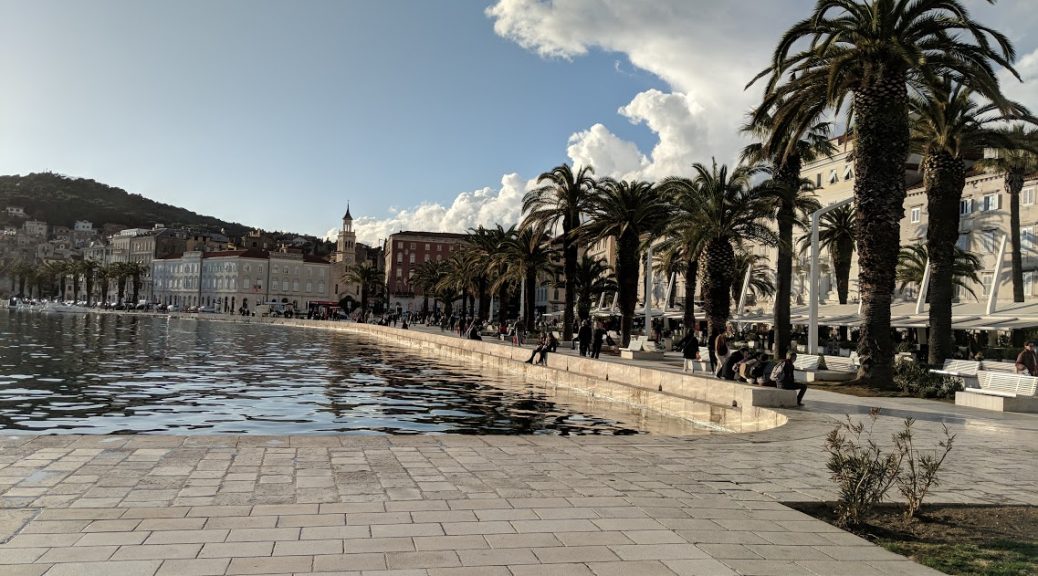 For our one night in Split, I had booked a room at the Radisson Blu Resort & Spa. The rate was quite affordable, at 115 EUR, owing to the fact that we were visiting in spring. During the summer rates can easily surpass 300 EUR per night.

Thanks to my Concierge status, we were upgraded to an apartment on the top floor. The room was absolutely stunning, with a full wrap-around balcony.

There was also a separate living room, but the couch was very uncomfortable.

The bathroom was fine, though the bathtub was essentially in the bedroom, which was a bit odd. Thankfully there was a private shower.

In the living room was a nice gift box as a welcome gift.

After taking a quick nap, my friend and I drove into town. Parking was easy and affordable.

Split is a beautiful coastal town and it was nice to just walk along the water and people watch.

Oddly enough, Split had a very large population of stray cats, and there were many to be found walking the city.

We also headed over to Diocletian’s Palace, which is 1700 years old. This is probably the main attraction in Split, and was also used as a set for Game of Thrones. It makes up most of the old town, and is the most complete Roman palace still standing today.

After grabbing a light dinner, we returned to the hotel. The next day had many hours of driving ahead of us, so we went to bed nice and early. Split was beautiful, and I would love to spend more time here in the future.