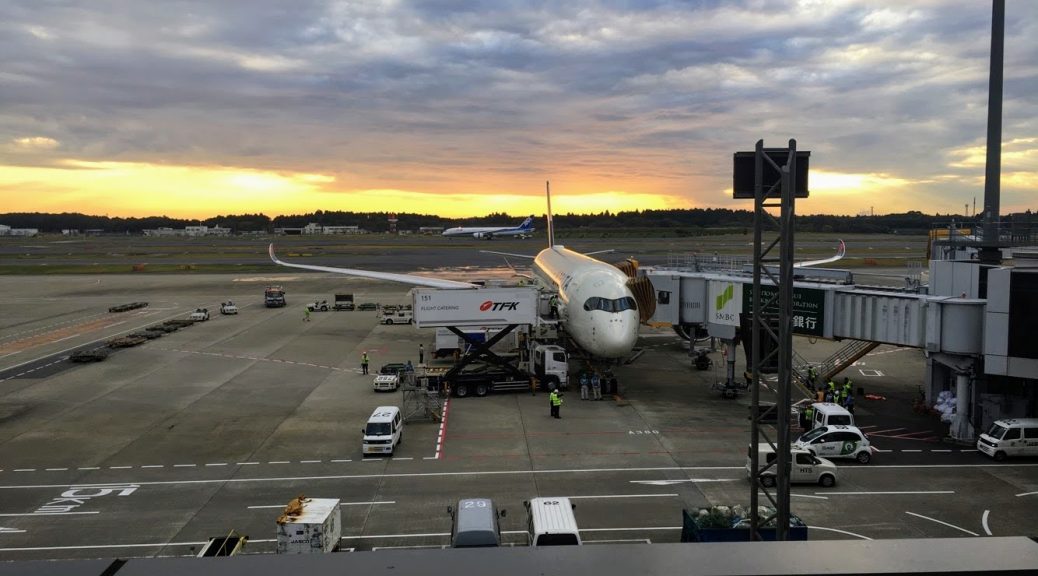 Hello everyone! Today is an incredibly exciting day as the Airbus A350 enters service for Delta Air Lines! I purchased a seat (in Delta’s new Suites class!) several months ago when the inaugural route was announced, and I’m thrilled to be able to share my experience in real time today! I shouldn’t have any trouble updating while on board, as Delta’s equipped their A350 with 2Ku WiFi. However, if you want more photos, you can also check out my Snapchat Story of today’s events @mspgabe.

920a – Just arrived in Detroit from Chicago Midway. I made sure to leave plenty of time to connect to ensure I wouldn’t have any trouble catching the flight. Looks like Delta’s set up a First Flyer’s Club Lounge for the occasion, complete with a model A350 and photo area.

Delta also made sure to park their new Flagship at A40, directly in front of the famous Detroit fountains. Makes for some great photos.

One of the only things I dislike about DTW is the dots on the windows, which makes it tough to get a good photo. Nonetheless, here’s the beautiful bird in all its glory.

1030a – They’re still setting up the area for the celebration later. Should be done in about 45 minutes.

1230p – Enjoying the festivities here! They have champagne for folks, and a nice travel wallet as a gift from Tumi.

Plenty of media here as well, was interviewed by some local news stations.

Boarding should begin soon. Stay tuned for updates on board!

130p – WOW. Where to start? Just got on board about 10 minutes ago. I’m blown away. The Suite is incredible. There’s also free WiFi throughout this flight which should be fun. Hope it’s not too slow.

The seat itself was something I was initially a bit concerned about, as it’s of a similar style to the 767 seat.

However, the seat is much wider and there’s tons of personal space.

Lots of storage space as well.

Most importantly, the footwell space is much, much bigger than on the 767, and should be comfortable when sleeping. More on that later.

The in flight entertainment screen is massive, with nice mood lighting.

At the seat were a full set of amenities including duvet, two pillows, a Tumi amenity kit, and slippers.

There was also a gift box containing some inaugural flight gifts.

More to come once in the air!

The Suite doors stay locked until after takeoff, so naturally the first thing I did was try it out.

I also checked out the lavatory. It’s a decent size (but could be bigger!) and looks great.

There’s a HUGE library of content, it’s hard to figure out what to watch. I settled on Rogue One: A Star Wars Story.

430p – Just finished eating lunch. The food was excellent and cooked perfectly. It was nice to see duck confit for the starter instead of seafood.

As expected, footwell space is much bigger than the 767. More akin to the A330 and much less of a coffin feel. I can raise my knees and roll over on my side without much trouble.

The seat padding is memory foam, which is very comfortable.

With the Suite door closed it’s pretty private. While it’s not tall, it helps block out the aisle foot traffic.

Wi-Fi Speeds have really slowed… Hopefully they’ll be quicker when I wake up!

100a – Just woke up. I had gotten up earlier to update, but the Wi-Fi had gotten so overloaded that it stopped working.

The bed is quite comfortable and I had a very refreshing sleep.

Hoping to visit the Flight Deck after landing.

430a (530p Tokyo) –  Just got to my hotel in Narita! What an amazing trip that was. The A350 is a remarkable aircraft, and a great new flagship for Delta.

I kept marveling during descent how large the windows were.

We landed on time and were met with a traditional water cannon salute. Plenty of ground workers were taking photos of the aircraft as well.

After arriving at the gate, I waited a little bit so that I could get a quick peek inside the flight deck.

The Suite product is excellent, and a huge step up from the 767 product. There is a huge amount of space in the Suite itself, and the seat is very comfortable. I didn’t have a hard time falling asleep (or staying asleep), but some may find the armrest cumbersome.

It’s tough to give a truly objective ranking at the moment, as I just got off a remarkable flight and it’s fresh in my mind. But I still think this is Delta’s best Business Class product, just edging out the 747 and A330.

I had a few minor gripes, the biggest of which was the fact that the lavatory doors in Delta One were a little difficult to close and latch. My guess is it’s just growing pains with the new aircraft.

The seatbelt is a little short, so when reclined fully flat, it’s a bit tight.

Overall though, Delta and Airbus have done a remarkable job with this airplane, and I think it’s going to be extremely popular with customers. I can’t wait to fly it again.