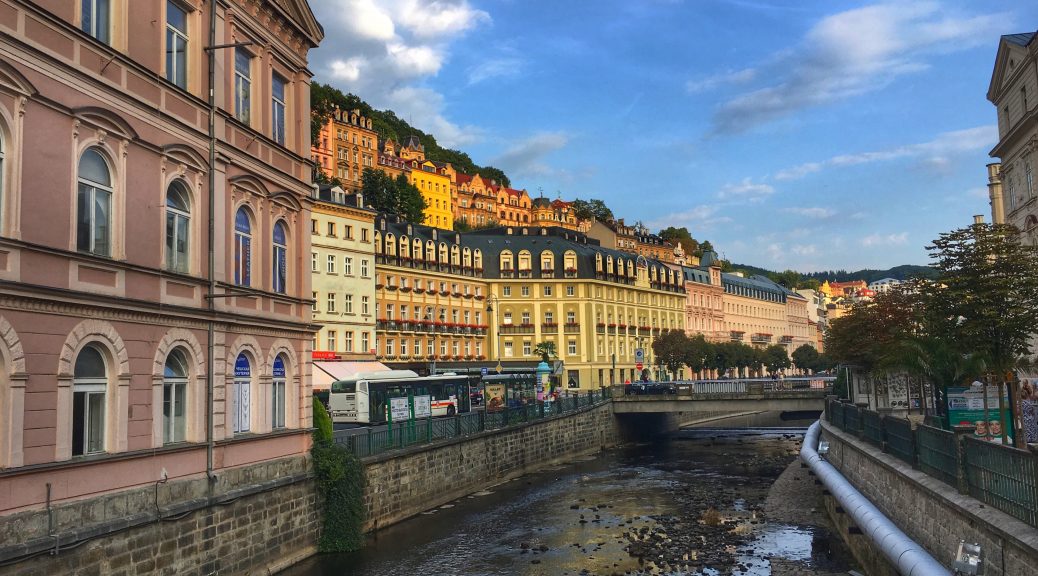 The Czech Republic (or Czechia) has been one of the most popular European destinations the past several years. Many airlines are adding flights to Prague at least seasonally to keep up with increased demand. While Prague’s been high on my list for quite some time, my first time in Czechia was in the much lesser known, but just as beautiful, Karlovy Vary.

This spa town, located in the Bohemia district, is about a two hour drive west from Prague. Alternatively, you can also reach it by driving north from Munich. Since I go where there are open seats, Munich won out. Plus, I’d get to drive on the Autobahn!

Delta runs a 767-300ER between Detroit and Munich. The route is only a year or so old, and it compliments Delta’s Atlanta – Munich service.

I’ve written about the seats on the 767 before, so I won’t repeat myself. The seats are comfortable enough but is close to the bottom of the list as far as Business Class products go. Thankfully, on this flight we were in Row 1, which has greatly increased footwell space. The meal service was excellent, and as usual I fell asleep shortly after dessert, sleeping through the pre-arrival meal.

We picked up our rental car that we had reserved through Hertz. We carefully checked our rental agreement to ensure we could drive across the border to Czechia. Most of the time you don’t have any issue driving within Europe, especially within the EU. However, some rental companies place additional restrictions on driving, and we wanted to make sure we wouldn’t have any issues.

In addition, Czechia requires a Sticker to drive on certain highways within the Czech Republic. Our car came with one already, but if yours doesn’t, you must stop along the border to pay for one, or risk hefty fines.

Driving the autobahn was exhilarating, albeit a little scary. For much of the road there’s a suggested speed limit of 130 km/hr, but in good driving conditions most people go faster. I typically stayed around this limit much of the time, however keeping up with traffic typically meant driving closer to 160 km/hr.

The drive was pretty easy, and we arrived into Karlovy Vary mid-afternoon. We had booked a room at the Ambassador Grandhotel located downtown. The exchange rate is very favorable, and we got a great deal under $100/night.

After a quick nap to refresh, we walked around town. The architecture is absolutely stunning all over the city, but especially along the Ohře River. The town is simply beautiful.

After spending a few hours walking around downtown, we headed back to the hotel restaurant where we had dinner. I had duck confit, while my friend tried an excellent boar goulash. We then shared an apple turnover for dessert.

With a long drive back to Munich ahead in the morning, we turned in for the night pretty early. While we only had an afternoon to explore the city, there’s no doubt it’s one of my favorite cities in Europe.