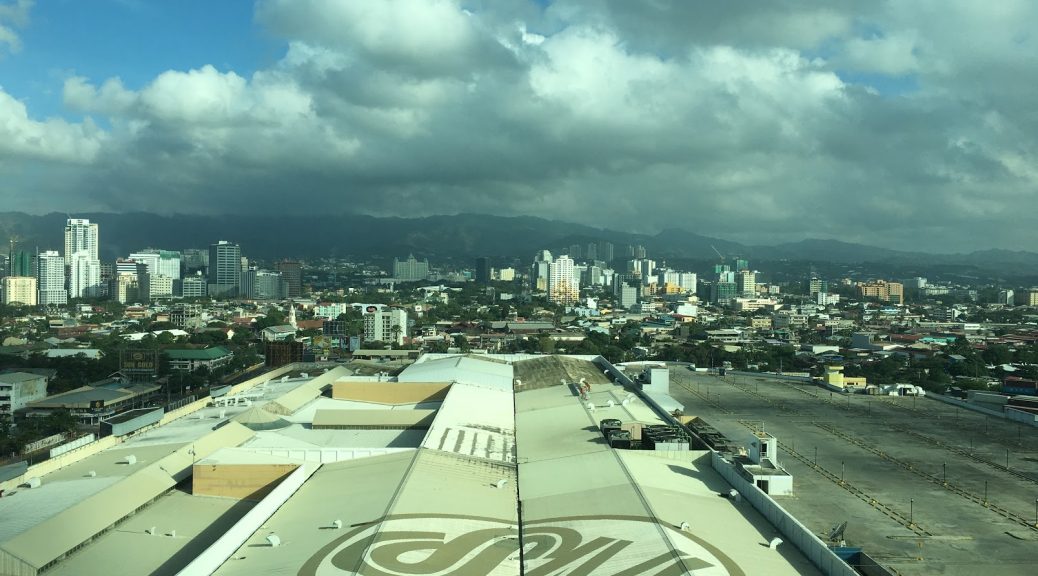 As I mentioned in my first post, I’m currently in the middle of a 16 week work assignment in Cebu, Philippines. I’m looking forward to sharing all of my amazing experiences in this incredible country, but first I need to talk about the nearly 30 hours of travel required just to arrive in Cebu.

I almost always travel light, as I am rarely gone for more than three or four days. For this trip though, I needed to pack quite a bit heavier. I packed two full suitcases (though to be fair, they are both carry-on sized), a backpack, my dSLR camera, and…my bowling ball. You may be wondering why I wanted to bring a bowling ball to the Philippines. The simple answer is, I love bowling (despite not being very good) and there happened to be a bowling alley across the street from the hotel.

Despite working for an airline, when traveling internationally on company business, we are not guaranteed First or Business Class for the trip. We are eligible to stand by for a space available upgrade, however. As the nonstop Minneapolis to Tokyo flight did not look good for that upgrade, and I wasn’t looking forward to 13 hours in Economy, I took a routing via Los Angeles:

Even with PreCheck, I made sure to arrive at the airport more than two hours before departure. I needed to check my baggage, and since I was connecting with another airline (Philippine Air) on a separate ticket, I wanted to leave plenty of time in case there was an issue checking baggage.

Thankfully, I was able to get my bags checked with no issue. However, going through security was another story. Remember my bowling ball? Well, apparently bowling balls are a security risk, as my bag was flagged for secondary screening at the checkpoint. A nice TSA agent explained that due to the makeup of the ball, he wasn’t able to see through it with the X-Ray. Since he couldn’t see through it, he couldn’t let it through the checkpoint, but did say I could check it if I wanted. Since I didn’t want to deal with a third checked bag, I decided to hand it over to my parents, and forgo bringing it.

With more than an hour before boarding my flight to Los Angeles, I headed to the Delta Sky Club outside the F Concourse for some breakfast. I purchased a club membership last year after several years of debating whether it would be worth it. With the amount of travel I do, and potentially long waits waiting for a seat on an open flight, I finally relented.

Just before boarding, I headed to my gate in the G Concourse and noticed that I had been upgraded to First Class for the flight to Los Angeles. This was an early departure on a weekend, so there wasn’t much of an upgrade list. I settled into Seat 3A on board a Delta 757-300, and prepared for a very long day of travel.

The short, 3 1/2 hour flight was uneventful. I caught up on some sleep, as I had spent the night before packing. I did wake up for breakfast though, a cheese omelet with hash browns, sausage, a bagel, and fresh fruit. It tasted fine, though nothing special.

Upon landing in Los Angeles, I had about two hours before my next departure. Normally I would head to the SkyClub, but I met up with a couple colleagues who were also routing via LAX to head to Cebu. Shortly before boarding we all were called to the gate for new, Business Class seat assignments. We then boarded our 777-200LR that would take us across the Pacific Ocean to Tokyo.

I was assigned seat 3B, an aisle. Delta’s 777’s are configured in a 1-2-1 herringbone layout. It’s Delta’s 1st generation lie flat product. While comfortable, I strongly prefer the reverse herringbone layout on Delta’s A330s and 747’s.

After getting settled, the flight attendant came by and offered me a pre-departure beverage. I opted for a mimosa which was quickly served, along with a bag of nuts. I really miss Delta’s warm nuts that they used to serve in Business Class…

Takeoff was smooth and uneventful, and as soon as we hit 10,000 feet I flipped out the IFE screen. When flying internationally, I have a routine, as I suspect many frequent travelers do. I turn on a movie shortly after departure, which usually finished around the time the meal service concludes. Then I try and get a few hours of sleep.

Delta’s IFE selection is excellent. There are plenty of choices for all genres and it’s updated regularly. In this case, I decided to watch Everest. It was both fascinating and terrifying.

The meal was good. I had the beef entree which was excellent. An ice cream sundae for dessert finished off the meal nicely.

After dinner, I reclined and quickly fell asleep. Normally on flights to/from Asia I get six or so hours of sleep without much issue. In this case, however, I got less than four. About 5 1/2 hours after takeoff I was woken by the Captain making an announcement. We were diverting to Anchorage, Alaska and about to start our descent. Oh goodie!

This was my second diversion, the first being for inclement weather in Minneapolis a few years ago. The good news (if you can call it that) was that it wasn’t a mechanical problem with the aircraft. A passenger had fallen ill and the crew made the decision to divert. It’s a good thing it happened before we got too far over the Pacific. We landed and pulled to a gate. The ill passenger walked off without assistance, so I’m not entirely sure what the issue could have been. Sadly, I was in an aisle seat and I didn’t get to snag any spectacular views of Anchorage on approach.

Diversions on flights, especially long-haul international ones, can be messy. In this case things were made a bit easier because we were still in the United States, but there were many other things to consider such as fuel load, flight plans, crew legality, etc. Being halfway through a long flight, I thought it was a near certainty our crew would hit their legal daily limit and the remainder of the flight would be canceled.

Thankfully, the crew worked incredibly hard to get things going as quickly as possible, but we still were on the ground 90 minutes before the Captain announced we had the new release and we were on the way. We pushed back from the gate…and waited. And waited some more. Then we headed back to the gate again.

At this point I was absolutely certain the crew had timed out and I’d be spending the night in Anchorage. It normally would not be a big deal, and Anchorage is one of my favorite cities, but I had a confirmed flight on Philippine Airlines down to Cebu and I was very concerned about missing that.

It turns out, though, that a family member of the ill passenger had forgotten (?) to get off when we were at the gate the first time. So it was a quick, 5 minute return to gate before leaving again.

After takeoff, the flight attendants came by with a snack basket service for Business Class, which was a nice touch. I was able to get another few hours of sleep before we touched down at Narita about 3 1/2 hours behind schedule. My original layover was five hours, so my connection, while tight, was still okay (though the delay meant I couldn’t head into Narita-shi to one of my favorite restaurants). My biggest concerns were getting to my connecting gate in enough time to check in for my flight and that my baggage would be transferred.

Delta uses Terminal 1 at Narita, while Philippine Airlines uses Terminal 2. Having never transited terminals in Tokyo I was a bit concerned, but it’s incredibly easy and reasonably fast. A quick 10 minute bus was all it took. And having great ramp views was a nice bonus.

I made it to the gate about 15 minutes before check-in cutoff, and had no issues getting a boarding pass. The agent even confirmed my baggage had already arrived, which was a relief. I was also able to meet up with 10 coworkers who were on the same flight and who had arrived from various other US cities. Boarding wouldn’t begin for another 30 minutes or so, which left me some time to get my ramen fix at an airport restaurant.

Boarding was easy and quick, as the flight was only half full at most. I had an aisle seat but quickly moved to the window as there was nobody else in my row.

After takeoff blankets and pillows were passed out, followed by a quick meal service. The crew were professional and kind. The blankets were of decent quality, though sadly I didn’t get a picture of them. For the meal, there was a beef option and a vegetarian option. I ordered the beef.

After eating, I quickly fell asleep, despite my intentions to stay awake throughout the flight. I knew I’d have a hard time adjusting to the 13 hour time difference if I arrived at the hotel having slept the previous several hours, but with no IFE, I struggled to stay awake. I roused shortly before landing, and we touched down around 12:30AM.

Everyone’s baggage arrived without issue, and our hotel shuttle service was waiting for pickup. Thank goodness they brought a large van, as 11 of us with 16 weeks worth of luggage in tow meant a very full load. The drive from the airport on Mactan Island to the Radisson Blu in Cebu took about 30 minutes. Despite the 2AM arrival the hotel was ready for us, and we were all checked in already. All I had to do was grab my room key and head upstairs.

I had finally made it! I took a much needed shower, unpacked my things, and crashed…only to wake up at 7AM, as I typically do when I land in Asia. Hey, at least the view was nice!

While it was a long and interestinglong trip, things went pretty smoothly all in all. I arrived safely, on schedule, and with bags. You can’t ask for much more than that. Now that I’ve covered my journey here, I can’t wait to share my adventures and excursions with you. Stay tuned!

4 thoughts on “4 Months in the Philippines – Part 1: Getting There”