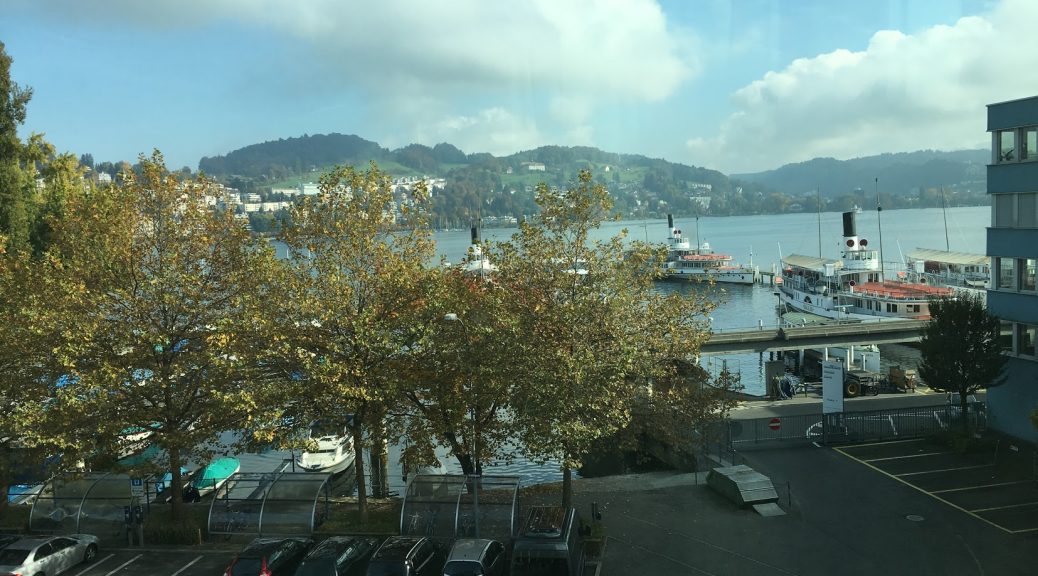 After exploring Liechtenstein, we headed back out onto the road to Lucerne, where we had booked our hotel for the night. Again, the drive was about 90 minutes, though traffic got really bad once getting into the city. Sadly, we arrived in the evening, and didn’t get much of a chance to explore the city and lakeside.

As you may expect, accommodations in Switzerland are expensive. Luckily, there are a large amount of Club Carlson properties in Europe, and I had a large stockpile of points from my time in Cebu. While I’m usually stingy on using points, the rates we were finding were in the $300-$400 range, pricey even if splitting the bill, which made using points a no brainer here. Even still, the 70,000 point rate at the Radisson Blu Lucerne was hard to swallow.

What made it easier, however, was the upgrade we received to a suite upon check-in, thanks to my Concierge status. We received a lovely corner suite on the top floor of the hotel, complete with a full kitchen, living room, and two bathrooms.

The following morning, we set out for Basel, located to the north, along the French border.

We stayed at the Hotel Pullman Basel, a Mercure property. When traveling in Europe or Asia, I will check Accor properties if I can’t find any Starwood, Carlson, or IHG options. They’re typically reasonably priced, and there are some gems hidden among some budget options. While the Pullman wasn’t exceptional, our room was nice enough, with a balcony overlooking the city. In addition, we were given free public transportation vouchers. While we didn’t use them (the city itself is quite walkable), it was a nice gesture.

Basel straddles the Rhine River, and much of our time was spent walking along the riverside.

We grabbed lunch at a small little Café called 1777. The highlight of the menu is the Baguette Factory, where you can make your own sandwich. But they also had meat and cheese plates, burgers, and salads. I had a mozzarella and prosciutto sandwich with cucumber, lettuce, and a sauce similar to mayonnaise. It was one of the best sandwiches I’ve ever had. To wash it down, I ordered a Schlappe-seppel-hefe-weissbier, a very tasty Radler.

After lunch, we just walked around enjoying the city. The city center has some great architecture, including the Town Hall in the Marktplatz. We then headed to the riverbank to sit and people watch for a while.

With all the driving the past two days, we turned in fairly early, knowing we had a morning flight up to Paris ahead of us.