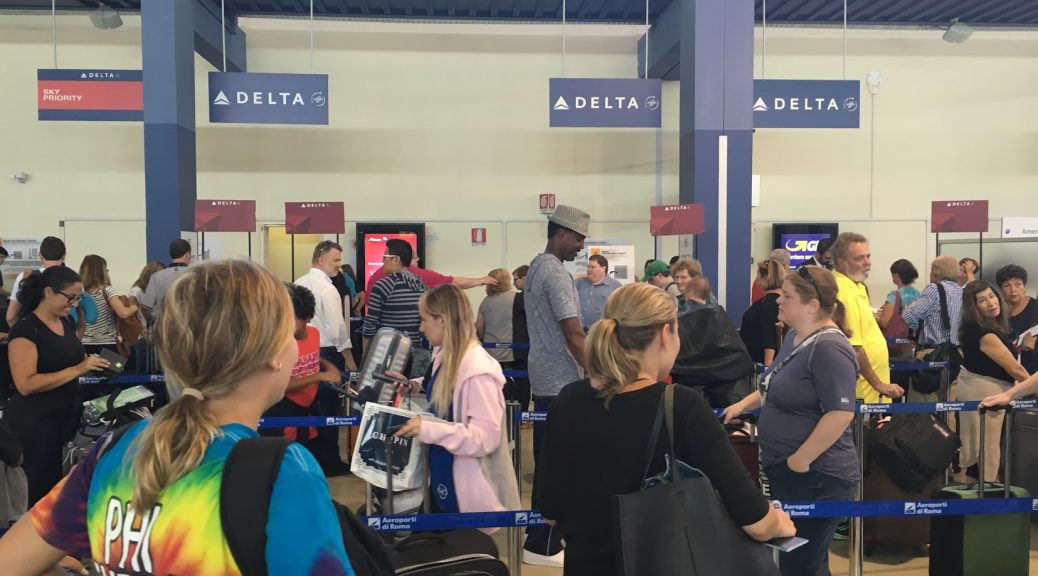 While I typically can arrive 90 minutes or so before departure at most airports and make my flight in plenty of time, I wouldn’t even think about it in Rome, as the check-in process takes ages. Delta has since moved to Terminal 1, making things easier, but at the time they used Terminal 5, a satellite terminal inaccessible by foot from Terminal 1 and 2.

Prior to reaching the check in hall, you are required to go through a security check. This is similar to many European airports, and consists of a short interview with the standard baggage security questions, as well as tagging carry on bags. The line for this took about 20 minutes.

After the security check, you then wait in line to check in and get a boarding pass, and drop checked baggage if needed. This line moved quite slow, and took almost 40 minutes.

I then waited in line for exit immigration, and was very grateful I arrived at the airport 3 hours early. This line was massive, and it took over an hour to get through. Immediately post immigration are buses to take you to the gate areas. I love taking a bus across the ramp at major international airports, as you get up close and personal with some very large aircraft.

The gates area only really has duty free shopping, so I just sat at the gate, keeping my fingers crossed for a Business Class seat. I’ve had pretty good luck traveling standby internationally, only being in Economy 3 times (from London, Amsterdam, and Paris). Unfortunately, my luck ran out on this trip, and I was cleared in Economy, missing Business by one seat. Thankfully, it wasn’t a middle seat, and was even a Delta Comfort + seat.

Before takeoff, flight attendants handed out headphones to those who wanted them, plus a sleep kit, containing ear plugs and an eye mask. The ones in Comfort+ include a toothbrush and toothpaste, which is nice.

After takeoff, flight attendants came by with a drink service and pretzels. While alcohol is free in Economy internationally, I don’t typically drink on planes, so I grabbed my typical ginger ale.

Meals in economy look like nothing special, even on world class airlines. They’re basically glorified TV dinners. That being said, I find they typically taste pretty good. I had the beef, which came with rice and veggies. There was also a side salad, bread, crackers and cheese, and an orange chocolate mousse that was excellent.

After dinner, I pulled on my eye mask and tried to sleep as much as possible. I sleep well on planes, regardless of where I’m seated. I was able to get about 7 hours of (occasionally fitful) sleep on the 10 hour flight.

Before arrival, a light snack was served along with another round of drinks. This was an Italian Meatball wrap that tasted just okay, and some ice cream.

The remainder of the flight was smooth, and while I certainly would’ve preferred to be in Business, I survived Economy just fine. It’s never quite as bad as I’m fearing it’ll be.

Rome’s a fantastic city with plenty to see, and the vast majority of the sights to see are free. While you can certainly spend money for things such as a tour of the inside of the Colosseum or a visit to the Sistine Chapel, you don’t have to, and it’s a trip that can be done very affordably. Quite a contrast from my next trip, to one of the more expensive countries in Europe.